428 new deaths taking the total to 33,614. Brazil seem to be at their peak now with 835 deaths in the last 24 hours. However, when we look at deaths per million population it’s a different picture:

An antibody test has been approved. It is said to be 100% accurate in terms of telling you if you have had the virus. That is all it tells you. That you have antibodies to the virus so you must have had it at some point and were immune at the time the test was done. It doesn’t tell you how long you will be immune for.

So, what does this mean. It means we could get a more accurate picture of how many people have been infected. It also means for the people that find out they have had it, that they had the illness and they didn’t die from it. For M that could be huge. He is living with the expectation that he will almost certainly die if he gets the virus. What if he won’t? What if he’s had it and he didn’t. It would take at least some of the risk out of travelling to Barbados.

One study has estimated that 19 million might already have been infected. Almost a third of the population. That could be good because the more people that have had it the closer we are to reducing the viral load out there in the community.

Its the first day of the new “relaxed” lockdown guidance. Garden Centres opened today and people have been out in their droves buying plants it appears. When M went for his bike ride hw said their were significantly more cars on the roads. Is transmission going to increase? Will we have another wave? There were still over 3,000 new cases reported yesterday so it’s still out there.

The big drama of the day was that I fell over when I was out for my daily walk. I was so shaken up I didn’t write this blog post yesterday – I’m writing it on Friday morning.

I was walking down a narrow footpath in the nature reserve near our village. I was rushing because I was conscious that the path was so narrow that if I met anyone coming the other way we’d have to get a bit too close for comfort.

Anyway, I tripped and fell flat on my face. I crashed nose first onto the edge of the path. I was so stunned I couldn’t even get up for couple of minutes. When I did, I realised my nose was bleeding. I had no tissues so my face and hands were quickly covered in blood. But, I had no idea what I looked like and I had to walk home.

I must have passed four or five people on my way back. All of them looked at me in horror and one woman placed a tissue on the ground for me to pick up.

I was almost home when I realised that I wasn’t wearing my glasses! They must have fallen off and in my daze I hadn’t noticed. I had to go back and try and find them. It took me a while, searching through the undergrowth, trying to remember exactly where I fell. A young couple stopped to help, in a socially distanced way. But, I did find them and headed home on another walk of shame to get myself cleaned up.

My nose is pretty sore and I had a headache for the rest of the day but I’m quite excited to have my first ever black eye! 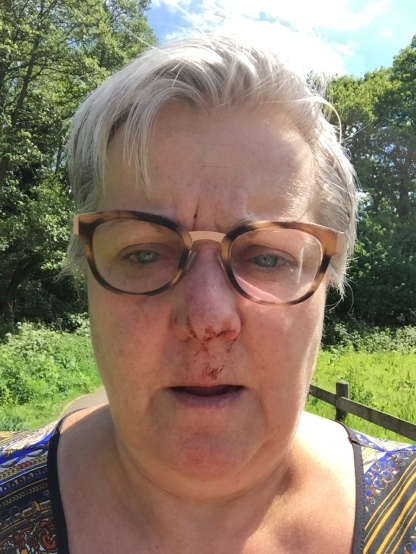 We did some work on Key Ways yesterday. We have a seminar next Thursday which we need to prepare for.

We had a little writers group virtual catch-up at 3 to prepare for tomorrow’s meeting. Had to join them on a cheeky little afternoon glass of wine!

We had our first takeaway curry! Washed down all the packaging and only ate the cooked food – left the salad. It was nice but not as nice had we had imagined it would be. M says he prefers my home cooked curries which I have been doing every Friday but it taken me most of the afternoon.

So this week we have broken our new Covid routine. We had our curry on Thursday! What will we do Friday?!? Actually, I still have half of mine left so M is going to have a defrost a chill for himself. Yey! No cooking for two nights in a row!!!!