An easy and enjoyable read. 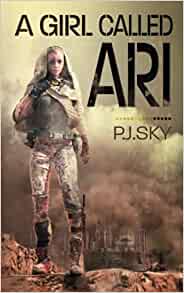 As a self-published author myself, I try to read books by other “indie” writers from time to time. Sadly, it is sometimes a disappointing experience. However, every now and then you come across a little gem. Happily, this was the case with A Girl Called Ari.

I first noticed this book on Twitter where the author noticeably works harder than most (not always an indicator of quality) to promote her work. Then when a friend, who also came across it on social media, recommended it as something I might enjoy, I decided to give it ago. I am after all, a sucker for a good dystopian tale!

The book tells the story of Starla, the daughter of the mayor of Alice, a fortress, futuristic city in the midst of a barren and dangerous post-apocalyptic wasteland. Starla is kidnapped (I’m still not entirely sure why and by whom) but escapes and is trying to make her way home. She comes across Ari, a girl of similar age but very different circumstance. Ari lives in a cave and, in contrast to the life of luxury and excess that Starla has enjoyed, has barely any possessions other than the clothes she is standing in. Ari is gritty and strong and knows better than most how to survive in the wastelands. However, we learn that this was not always the case as she too lived in the city at one point in her past.

And so, Ari gives up her cave, her horrible but sustaining job in the salt mines and her meagre possessions to help Starla get home, in the (vain?) hope that she will somehow enable Ari to re-enter the city.

I loved the imaginative but believable world-building and the contrast between the glittering riches of the city and the bleak barren wastelands which is mirrored by the starkly contrasting lives of the two girls. I assumed the book is set in Australia, due to the references to Alice and a location that sounds like Uluru (Ayers Rock). The rough dialect of the people of the wastelands could, to me, have been broad Australian and some of the characters the girls came across felt aboriginal to me. However, I could be wrong as the author is British. It might just have been my imagination that carried me down that route as the location is never made explicit.

I liked the main characters. Starla is irritating at first but, as the spoiled daughter of the mayor she knows no better and she does soften and become more likeable towards the end. Ari is great! I loved her and I can imagine her being an icon for young adult readers along the lines of Katniss from The Hunger Games or Beatrice from Divergent. I’d love to read more about her adventures and will make time to read the sequel, Ari Goes to War.

The development of the relationships between the two main characters is captivating. Its begins as one based purely on mutual need and both girls are participating in the arrangements because they have something to gain from it. However, it develops into a stronger relationship that verges on friendship throughout the various twists and turns of their journey.

Some of the descriptions of the environment are vivid and beautiful and at times I was totally immersed in Ari’s world.

The plot was predictable. It does have some surprises but, on the whole, I kind of expected everything that happened. (Starla getting bitten by a crocodile was a bit of a shocker though!) However, the book is aimed at a young adult audience and as such is arguably necessarily formulaic and slightly cliched at times.

Some of the big moments of the story and some of the action sequences were muted. They lacked that element of drama and impact that they could have brought to the reading experience. For example, “Then a huge gaped mouth, lined with a serration of jagged white teeth, emerged from the water and clamped down on Starla’s leg.” and “What is happening, thought Starla? It feels like an earthquake.”

There were sections of the book that dragged on and didn’t add value to the story either in terms of plot, word-building or character development. Some sections left me downright bemused and confused. For example, the message from the “dish”. This hinted at providing some background and some answers but fell just a little short of the mark for me in this respect.

I wanted some satisfying answers or explanations to various threads that were contained within the text. I accept that some of these may be addressed in later books in the series, but I was left with a lot of unanswered questions. For example, why was Starla kidnapped in the first place and was it an inside job? Could Ari be Starla’s half-sister? What was the significance of the broken piece of pottery with the blue bird on it? What sort of event caused the apocalypse – there is mention of both disease and a meteor and the strange star, Vella Stella?

All things considered, a fast-paced, easy and enjoyable read and a super first book from a talented (young?) writer. I look forward to seeing the development of her writing and so I’ll definitely be giving Ari Goes to War a go!